From Monolith
Jump to navigationJump to search 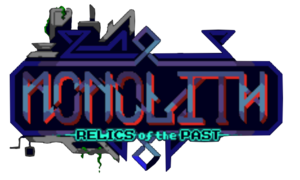 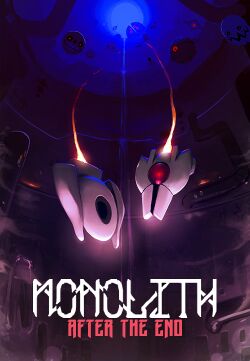 After the end update cover with Null and D-13

Monolith is a Bullet Hell-Roguelike game developed and published by team D-13, where you explore procedurally generated floors, while fighting any enemies and bosses that stand in your way, searching for the "great and calamitous power". You start the game in a tutorial area as Null, and at the end of the tutorial, you encounter D-13, the Thirteenth Visitor, for your first boss fight. Win or lose, you'll next go upwards to access the game's hub, from which you can go downwards to replay the tutorial, or upwards to start a proper run.

The Multiplier is shown on the top-right corner of the screen, next to the minimap.

Multiplier at its maximum

It starts at x1.0 and while killing enemies it goes up and consequently increases the amount of scrap you gain, to a maximum of x2.5 (x3.0 on Relics of The Past DLC). If you take damage it will go down x1.0 at a time (if damage is negated by the Autobomb Upgrade or you have the Mining Hat cartridge, it will go down x0.5 instead. With both it merely goes down x0.2, and you won't lose multiplier at all from hits negated by shields.)

Dashing is a fundamental mechanic of the game, you can dash by pressing RMB, R1 on controller (if not reassigned to another button). While dashing you gain a speed boost that you can use to cover large portions of the rooms or to get out of danger (Like a bunch of enemies trapping you next to the wall). The Blink upgrade turns your dash into an instant teleport with a slight moment of invincibility afterwards, which allows you to trivialize individual walls of bullets, but does not give the same momentum as a normal dash.

Half of a bomb in the game's UI

Bombs are a crucial part of the gameplay of Monolith; being able to wipe all bullets on screen and push back nearby enemies is very helpful. If your current number of bombs is less than your rechargeable bomb capacity (2 by default), each room you clear will give you one third of a bomb (or half of a bomb with the Battery cartridge). The Extra Pow Upgrade increases your rechargeable bombs by 1, and a deal with Renegade that gives you 6 "special bombs" decreases it by 1. Special bombs are simply bombs with added effects, such as freezing all the enemies in the room, or firing a gigalaser wherever you're currently aiming.

You get a HP Part by obtaining a health pickup when you're already at full health. There are also items that specifically increase your HP Parts or just give you 1 more max HP. Once you reach the limit of 4 HP Parts, your max HP will be increased by 1. The indicator of how many you have is to the left of your HP. If playing with a non-mild lethality, attempting to increase your max HP will give you a shield instead.

While unneeded HP becomes HP parts, most unneeded pickups are turned into money instead. This is because most pickups disappear if you leave the room without picking them up. If a pickup has a lock symbol under it, this indicates that it will not break upon you leaving the room.

• +20% ammo pickups are salvaged for scraps when you have full ammo, or you're with only your starting weapon. Bigger ammo pickups will turn into max ammo under these circumstances.

• Standard bombs are salvaged for scraps when you have 6 bombs, but special bombs are never salvaged. If all your bombs are special, picking up a special bomb will move it to the front of the line and remove the one at the back of the line.

• Shields obtained in any way are salvaged for scraps when you already have a shield.

• Maps are salvaged for scrap when you have already uncovered the whole map (opening breach rooms is not necessary).

• Coffee is salvaged for scraps when you already have maximum charge.

You get the idea.

• Weapons are salvaged instantly while picking up a new gun, which gives you 1HP + scrap, and with the Salvage upgrade you get double the scrap + 2HP.

• When you salvage a weapon by pressing the Bomb button on the map screen, you will get scrap, but no HP.

•The more ammo a weapon has when you salvage it, the more scrap you get.

- If you carry a key to a new floor instead of using it on the vault (either you accessed the vault from a convenient secret room or just didn't bother), it will give you a relatively large amount of scrap for that point in the game. The price of a key in the shop is the amount of money you'd get for taking it to that floor.

-On the lowest floor, beating the boss will still allow you to salvage the key.

Retrieved from "https://monolith.miraheze.org/w/index.php?title=Main_Page&oldid=251"
Cookies help us deliver our services. By using our services, you agree to our use of cookies.